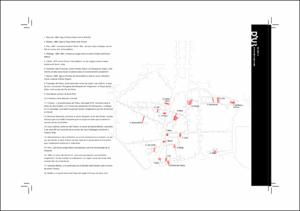 Document typeArticle
PublisherLaboratori d'Urbanisme de Barcelona
Rights accessOpen Access
Abstract
Shortly after the demolition of its town walls, Barcelona saw the appearance of the first passageways, concentrated around its Plaça Reial. Today there are 15 or more, scattered throughout Ciutat Vella. Built over a century ago in the archetypal image of the French passages, today they still look almost as they did then. Some remain commercial in nature, others stand out as unitary projects; very few have service as a function. Some are public thoroughfares, others are private space; some have gates that always stand open, others have railings that are sometimes locked. They are little-known but interesting corners in a medieval city that is now given over to visitors and tourists. And, as though oblivious to their surroundings, they manage to stand alone, an opportunity for anything to happen.
CitationGómez Escoda, Eulalia Maria. El temps perdut als passatges. "D'UR", 2013, núm. 04/2013, p. 62-67.
URIhttp://hdl.handle.net/2099/14376
ISSN2014-2196
Collections
Share: