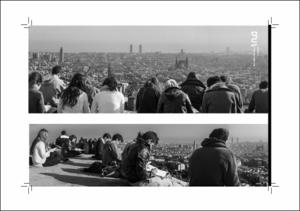 Except where otherwise noted, content on this work is licensed under a Creative Commons license : Attribution-NonCommercial-NoDerivs 3.0 Spain
Abstract
The recent silent intervention in the hill-top anti-aircraft batteries of El Carmel marks a new chapter in ongoing efforts to use public space in Barcelona to trigger social cohesion and citizen identity. Rather than superposing design on what used to be here, the project aims to showcase the culture of the place with its accumulated layers of things that have happened. It reflects a profound appreciation and respect for the memory of this eyrie where aircraft batteries were erected to defend the city from bombings during the Spanish Civil War (1936-1939), later one of the shantytowns of the post-war years. The winner of the European Prize for Urban Public Space (2012) is an excellent vantage point to enjoy the vistas, learn about the city’s relations between architecture and relief, and listen to the comings and goings of local people and the hum of distant traffic.
CitationJansana, Imma; Romero, Jordi. Recuperació dels cims del Turó de la Rovira, Barcelona. "D'UR", 2013, núm. 04/2013, p. 58-61.
URIhttp://hdl.handle.net/2099/14375
ISSN2014-2196
Collections
Share: