An empirical investigation into the changing visual identity of full service and low cost carriers, 2000 vs. 2012 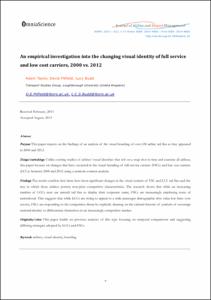 Purpose: This paper reports on the findings of an analysis of the visual branding of over 630 airline tail fins as they appeared in 2000 and 2012. Design/methodology: Unlike existing studies of airlines’ visual identities that rely on a snap shot in time and examine all airlines, this paper focuses on changes that have occurred in the visual branding of full-service carriers (FSCs) and low cost carriers (LCCs) between 2000 and 2012 using a semiotic content analysis. Findings: The results confirm that there have been significant changes in the visual content of FSC and LCC tail fins and the way in which these airlines portray non-price competitive characteristics. The research shows that while an increasing number of LCCs now use aircraft tail fins to display their corporate name, FSCs are increasingly employing icons of nationhood. This suggests that while LCCs are trying to appeal to a wide passenger demographic who value low fares over service, FSCs are responding to the competitive threat by explicitly drawing on the cultural rhetoric of symbols of sovereign national identity to differentiate themselves in an increasingly competitive market. Originality/value: This paper builds on previous analyses of this type focusing on temporal comparisons and suggesting differing strategies adopted by LCCs and FSCs.
CitationTaylor, Adam; Pitfield, David; Budd, Lucy. An empirical investigation into the changing visual identity of full service and low cost carriers, 2000 vs. 2012. "Journal of Airline and Airport Management", Desembre 2013, vol. 3, núm. 1, p. 1-17.
URIhttp://hdl.handle.net/2099/14290
ISSN2014-4806

Except where otherwise noted, content on this work is licensed under a Creative Commons license: Attribution-NonCommercial 3.0 Generic