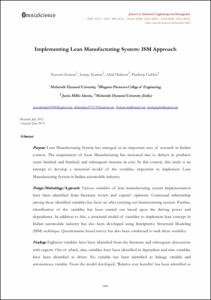 Show full item record
Kumar, Naveen
Kumar, Sanjay
Haleem, Abid
Gahlot, Pardeep
Document typeArticle
PublisherSchool of Industrial and Aeronautic Engineering of Terrassa (ETSEIAT). Universitat Politècnica de Catalunya (UPC)
Rights accessOpen Access
Abstract
Purpose: Lean Manufacturing System has emerged as an important area of research in Indian context. The requirement of Lean Manufacturing has increased due to defects in products (semi finished and finished) and subsequent increase in cost. In this context, this study is an attempt to develop a structural model of the variables, important to implement Lean Manufacturing System in Indian automobile industry. Design/Methodology/Approach: Various variables of lean manufacturing system implementation have been identified from literature review and experts’ opinions. Contextual relationship among these identified variables has been set after carrying out brainstorming session. Further, classification of the variables has been carried out based upon the driving power and dependence. In addition to this, a structural model of variables to implement lean concept in Indian automobile industry has also been developed using Interpretive Structural Modeling (ISM) technique. Questionnaire based survey has also been conducted to rank these variables. Findings: Eighteen variables have been identified from the literature and subsequent discussions with experts. Out of which, nine variables have been identified as dependent and nine variables have been identified as driver. No variable has been identified as linkage variable and autonomous variable. From the model developed, ‘Relative cost benefits’ has been identified as top level dependent variable and top management commitment as bottom level most independent variable. Research limitations/Implications: The model so developed is a hypothetical model based upon experts’ opinions. The conclusions so drawn may be further modified to apply in real situation. Practical implication: Clear understanding of interactions among these variables will help organizations to prioritize and manage these variables more effectively and efficiently to draw advantage from lean manufacturing system implementation. Originality/value: Through this paper we contribute to identify the variables to implement lean manufacturing system in Indian automobile industry and prioritize them. The structured model developed will help to understand interdependence of the variables of lean manufacturing system implementation.
CitationKumar, Naveen [et al.]. Implementing lean manufacturing system: ISM approach. "Journal of Industrial Engineering and Management", Desembre 2013, vol. 6, núm. 4, p. 996-1012.
URIhttp://hdl.handle.net/2099/14147
DLB-28744-2008
ISSN2013-0953
Collections
Share: