The effects of Nintendo Wii on the postural control of patients affected by acquiered brain injury: a pilot study 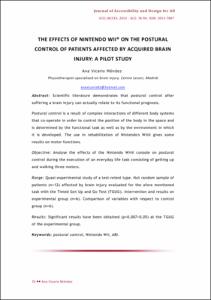 Show full item record
Vicario Méndez, Ana
Document typeArticle
PublisherCàtedra d'Accessibilitat (CATAC)
Rights accessOpen Access
All rights reserved. This work is protected by the corresponding intellectual and industrial property rights. Without prejudice to any existing legal exemptions, reproduction, distribution, public communication or transformation of this work are prohibited without permission of the copyright holder
Abstract
Abstract: Scientific literature demonstrates that postural control after suffering a brain injury can actually relate to its functional prognosis. Postural control is a result of complex interactions of different body systems that co-operate in order to control the position of the body in the space and is determined by the functional task as well as by the environment in which it is developed. The use in rehabilitation of Nintendo's Wii® gives some results on motor functions. Objective: Analyse the effects of the Nintendo Wii® console on postural control during the execution of an everyday life task consisting of getting up and walking three meters. Range: Quasi-experimental study of a test-retest type. Not random sample of patients (n=12) affected by brain injury evaluated for the afore mentioned task with the Timed Get Up and Go Test (TGUG). Intervention and results on experimental group (n=6). Comparison of variables with respect to control group (n=6). Results: Significant results have been obtained (p=0,007<0,05) at the TGUG of the experimental group.
CitationVicario Méndez, Ana. The effects of Nintendo Wii on the postural control of patients affected by acquiered brain injury: a pilot study. "Journal of accessibility and design for all", Novembre 2013, vol. 3, núm. 2, p. 76-94.
URIhttp://hdl.handle.net/2099/14099
ISSN2013-7087
Collections
Share: