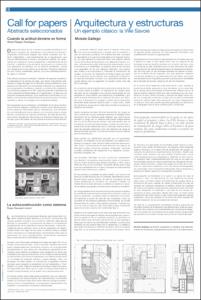 This article offers a reflection about the intimate relation between architecture and its supporting structure. The transfer of the structural weight and live loads is relevant for every building and therefore appears as an intrinsic part of the essence of architecture. Bearing walls allowed this load transmission until the mid-19th century. Untying walls from their traditional function through the incorporation of independent structural systems was one of the most important shifts taking place at the beginning of the 20th century. Le Corbusier’s Ville Savoye, in the 1930s, became a perfect example of these new values. The structural analysis of this masterpiece shows that one of the pillars on the second floor does not continue vertically to the ground. Instead, the supporting element disappears on the ground floor and the loads are transferred through two additional pillars placed symmetrically. This operation does not affect the value of a project that opened the door to so many new concepts in architecture.
CitationGallego Olmos, Moisés. Arquitectura y estructuras: un ejemplo clásico: la Ville Savoie. "Palimpsesto", Setembre 2013, núm. 08, p. 14.
URIhttp://hdl.handle.net/2099/14007
ISSN2014-1505
Other identifierseISSN 2014-9751