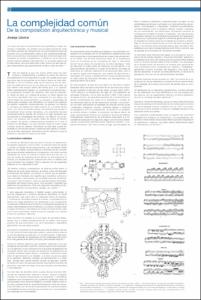 Show full item record
Llorca, Josep
Document typeArticle
PublisherPalimpsesto
Rights accessOpen Access
Abstract
Architecture and music are two systems that work similarly: the way of organizing the objects-spatially or temporally- is always “related to”. The objects are themselves in and through the others. This phenomenon significantly appears in musical and architectural works due to their condition of succession-and-assembly. We find this idea in some examples such as the relationship between volumes and space in the works of Louis Kahn and the relationship between the main and the secondary motives in Claude Debussy’s Prélude après midi d’un faune. Such process is not easy to explain because the founding element of the two disciplines (space and time) is radically different. However, there is something that matches them and enables their comprehension: they both build atmospheres that wrap us, they set the limit between the exterior world and us.
CitationLlorca, Josep. La complejidad común: de la composición arquitectónica y musical. "Palimpsesto", Setembre 2013, núm. 08, p. 12-13.
URIhttp://hdl.handle.net/2099/13989
DOI10.5821/pl.v0i8.2745
ISSN2014-1505
Other identifierseISSN 2014-9751
Collections
Share: