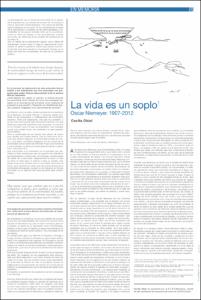 Show full item record
Obiol, Cecília
Document typeArticle
PublisherPalimpsesto
Rights accessOpen Access
Abstract
The life and work of Oscar Niemeyer was always intimately connected to his beloved Rio de Janeiro and its sensual shapes. In the late 30’s, at the age of 29, he developed his first profesional steps in Rio where he took part of the team led by Lúcio Costa in charge of the project for the Ministry of Education and Health. Almost 50 years later, having built an extraordinary amount of projects in Brazil and abroad, he came back to Rio and got the commission for the Museum of Contemporary Art in Niterói, on the other side of the Guanabara bay. After having built the MAC he developed a series of cultural public facilities in the seafront of Niterói known as the Niemeyer Way.
CitationObiol, Cecília. La vida es un soplo: Oscar Niemeyer 1907-2012. "Palimpsesto", Setembre 2013, núm. 08, p. 5.
URIhttp://hdl.handle.net/2099/13984
DOI10.5821/pl.v0i8.2740
ISSN2014-1505
eISSN 2014-9751
Collections
Share: