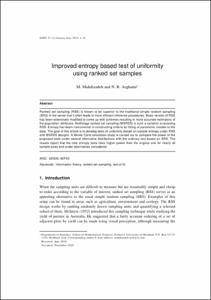 Show full item record
Mahdizadeh, M.
Arghami, N.R.
Document typeArticle
PublisherInstitut d'Estadística de Catalunya
Rights accessOpen Access
Abstract
Ranked set sampling (RSS) is known to be superior to the traditional simple random sampling (SRS) in the sense that it often leads to more efficient inference procedures. Basic version of RSS has been extensively modified to come up with schemes resulti ng in more accurate estimators of the population attributes. Multistage ranked set sampling (MSRSS) is such a variation surpassing RSS. Entropy has been instrumental in constructing criteria for fitting of parametric models to the data. The goal of this article is to develop tests of uniformity based on sample entropy under RSS and MSRSS designs. A Monte Carlo simulation study is carried out to compare the power of the proposed tests under several alternative distributions with the ordinary test based on SRS. The results report that the new entropy tests have higher power than the original one for nearly all sample sizes and under alternatives considered.
CitationMahdizadeh, M.; Arghami, N.R. Improved entropy based test of uniformity using ranked set samples. "SORT", vol. 37, núm. 1, p. 3-18.
URIhttp://hdl.handle.net/2099/13757
ISSN1696-2281
Collections
Share: