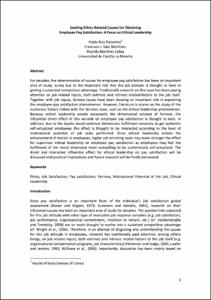 For decades, the determination of causes for employee pay satisfaction has been han important area of study, surely due to the important role that this job attitude is thought to have in getting a sustained competitive advantage. Traditionally research on this issue has been paying attention on job related inputs, both extrinsic and intrinsic related-factors to the job itself. Together with job inputs, fairness issues have been showing an important role in explaining the employee pay satisfation phenomenon. However, literature is scarce on the study of the numerous factors linked with the fairness issue, such as the ethical leadershio phenomenon. Because ethical leadership entails necessarily the dimensional concept of fairness, the influential direct effect of this variable on employee pay satisfation is thought to exist. In addition, due to the dyadic moral-technical dimensions fulfillment necessity to get authentic seft-actualized employees this effect is thought to be interacted according to the level of motivational potential of jobs tasks performed. Since ethical leadership entails the enhancement of morals in employees, higher job enriching tasks may make stronger the effect for supervisor ethical leadership on employee pay satisfation as employees may feel the fulillment of the moral dimension more compelling to be authentically self-actualized. The direct and interated influential effect for ethical leadership on pay satisfaction will be discussed and practical implications and future research will be finally delineated.
CitationRuiz Palomino, Pablo; Sáez Martínez, Francisco J.; Martínez Cañas, Ricardo. Seeking Ethics-Related Causes for Obtaining Employee Pay Satisfaction: A focus on Ethical Leadership. A: XIX Congreso de EBEN España. "Transformar el mundo-humanizar la técnica ética, responsabilidad social e innovación". 2011.
URIhttp://hdl.handle.net/2099/13580
ISBN978-84-695-0696-7