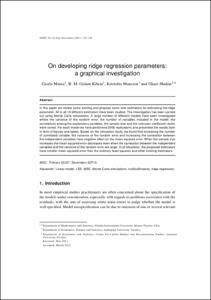 Show full item record
Muniz, Gisela
Golam Kibria, B. M.
Mansson, Kristofer Mansson
Shukur, Ghazi
Document typeArticle
PublisherInstitut d'Estadística de Catalunya
Rights accessOpen Access
Abstract
In this paper we review some existing and propose some new est imators for estimating the ridge parameter. All in all 19 different estimators have been stud ied. The investigation has been carried out using Monte Carlo simulations. A large number of differe nt models have been investigated where the variance of the random error, the number of variabl es included in the model, the correlations among the explanatory variables, the sample s ize and the unknown coefficient vector were varied. For each model we have performed 2000 replicati ons and presented the results both in term of figures and tables. Based on the simulation study, w e found that increasing the number of correlated variable, the variance of the random error and increasing the correlation between the independent variables have negative effect on the mean s quared error. When the sample size increases the mean squared error decreases even when the cor relation between the independent variables and the variance of the random error are large. In a ll situations, the proposed estimators have smaller mean squared error than the ordinary least squa res and other existing estimators
CitationMuniz, Gisela [et al.]. On developing ridge regression parameters: a graphical investigation. "SORT", vol. 36, núm. 2, p. 115-138.
URIhttp://hdl.handle.net/2099/13316
ISSN1696-2281
Collections
Share: