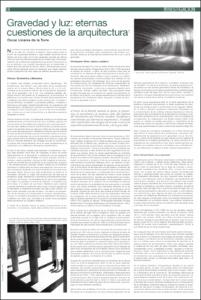 Document typeArticle
PublisherPalimpsesto
Rights accessOpen Access
Abstract
There is not a single work of architecture in the world which,in its quest to build the space, has been able to evade theeffects of terrestrial gravity or has been able to do withoutthe effects of sunlight. This has been expressed in recentyears by the most important architects of our country. Butthe understanding of the architectural significance of thesephenomena is not a discovery of modernity. This paper aims to make clear that light and gravity havebeen important issues for architectural theory since ancienttimes. Vitruvius notes in his treatise on architecture, the oldestof its kind, the central importance of gnomonics andmechanics, the sciences that study the movement of lightand gravitational matter respectively. A millennium and ahalf later, Christopher Wren reinterprets the Vitruvian principlesand writes a short treatise on architecture, where heshows that Optics and Statics are the geometrical reasonsfor the beauty and strength of architecture. Three centurieslater, Arthur Schopenhauer states, in his architectural masterpiece,that architecture intends to express the eternalideas of gravity and light. Light and gravity are fundamental questions in architecture.This is not disputed by anyone. But only a few knowthe scientific origin of the architectural interest in theseissues.
CitationLinares de la Torre, Óscar. Gravedad y luz: eternas cuestiones de la arquitectura. "Palimpsesto", Març 2013, núm. 07, p. 14-15.
URIhttp://hdl.handle.net/2099/13272
DOI10.5821/pl.v0i7.1280
ISSN2014-1505
Collections
Share: