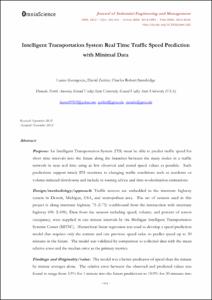 Except where otherwise noted, content on this work is licensed under a Creative Commons license : Attribution-NonCommercial 3.0 Spain
Abstract
Purpose: An Intelligent Transportation System (ITS) must be able to predict traffic speed for short time intervals into the future along the branches between the many nodes in a traffic network in near real time using as few observed and stored speed values as possible. Such predictions support timely ITS reactions to changing traffic conditions such as accidents or volume-induced slowdowns and include re-routing advice and time-to-destination estimations. Design/methodology/approach: Traffic sensors are embedded in the interstate highway system in Detroit, Michigan, USA, and metropolitan area. The set of sensors used in this project is along interstate highway 75 (I-75) southbound from the intersection with interstate highway 696 (I-696). Data from the sensors including speed, volume, and percent of sensor occupancy, were supplied in one minute intervals by the Michigan Intelligent Transportation Systems Center (MITSC). Hierarchical linear regression was used to develop a speed prediction model that requires only the current and one previous speed value to predict speed up to 30 minutes in the future. The model was validated by comparison to collected data with the mean relative error and the median error as the primary metrics. Findings and Originality/value: The model was a better predicator of speed than the minute by minute averages alone. The relative error between the observed and predicted values was found to range from 5.9% for 1 minute into the future predictions to 10.9% for 30 minutes into the future predictions for the 2006 data set. The corresponding median errors were 4.0% to 5.4%. Thus, the predictive capability of the model was deemed sufficient for application. Research limitations/implications: The model has not yet been embedded in an ITS, so a final test of its effectiveness has not been accomplished. Social implications: Travel delays due to traffic incidents, volume induced congestion or other reasons are annoying to vehicle occupants as well as costly in term of fuel waste and unneeded emissions among other items. One goal of an ITS is to improve the social impact of transportation by reducing such negative consequences. Traffic speed prediction is one factor in enabling an ITS to accomplish such goals. Originality/value: Numerous data intensive and very sophisticated approaches have been used to develop traffic flow models. As such, these models aren’t designed or well suited for embedding in an ITS for near real-time computations. Such an application requires a model capable of quickly forecasting traffic speed for numerous branches of a traffic network using only a few data points captured and stored in real time per branch. The model developed and validated in this study meets these requirements.
CitationGeorgescu, Luana; Zeitler, David; Standridge, Charles Robert. Intelligent transportation system real time traffic speed prediction with minimal data. "Journal of Industrial Engineering and Management", Desembre 2012, vol. 5, núm. 2, p. 431-441.
URIhttp://hdl.handle.net/2099/12962
DLB-28744-2008
ISSN2013-0953
Collections
Share: