Use of social media by airports 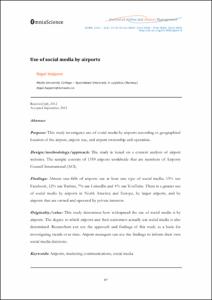 Show full item record
Halpern, Nigel
Document typeArticle
PublisherEscola Tècnica Superior d'Enginyeries Industrial i Aeronàutica de Terrassa. Universitat Politècnica de Catalunya
Rights accessOpen Access
Abstract
Purpose: This study investigates use of social media by airports according to geographical location of the airport, airport size, and airport ownership and operation. Design/methodology/approach: The study is based on a content analysis of airport websites. The sample consists of 1559 airports worldwide that are members of Airports Council International (ACI). Findings: Almost one-fifth of airports use at least one type of social media; 13% use Facebook, 12% use Twitter, 7% use LinkedIn and 4% use YouTube. There is a greater use of social media by airports in North America and Europe, by larger airports, and by airports that are owned and operated by private interests. Originality/value: This study determines how widespread the use of social media is by airports. The degree to which airports and their customers actually use social media is also determined. Researchers can use the approach and findings of this study as a basis for investigating trends over time. Airport managers can use the findings to inform their own social media decision
CitationHalpern, Nigel. Use of social media by airports. "Journal of Airline and Airport Management", Desembre 2012, vol. 2, núm. 2, p. 67-85.
URIhttp://hdl.handle.net/2099/12917
DOI10.3926/jairm.9
ISSN2014-4806
Collections
Share: