The urban sprawl: a planetary growth process?: an overview of USA, Mexico and Spain 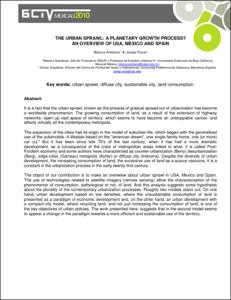 Except where otherwise noted, content on this work is licensed under a Creative Commons license : Attribution-NonCommercial-NoDerivs 3.0 Spain
Abstract
It is a fact that the urban sprawl, known as the process of gradual spread out of urbanization has become a worldwide phenomenon. The growing consumption of land, as a result of the extension of highway networks, open up vast space of territory, which seems to have become an unstoppable cancer, and affects virtually all the contemporary metropolis. The expansion of the cities had its origin in the model of suburban life, which began with the generalized use of the automobile. A lifestyle based on the "american dream‖, one single family-home, one (or more) car (s)." But it has been since late 70’s of the last century, when it has had a more dramatic development, as a consequence of the crisis of metropolitan areas linked to what, it is called Post-Fordism economy and some authors have characterized as counter-urbanization (Berry) desurbanization (Berg), edge-cities (Garreau) metapolis (Asher) or diffuse city (Indovina). Despite the diversity of urban development, the increasing consumption of land, the excessive use of land as a scarce resource, it is a constant in the urbanization process in the early twenty-first century. The object of our contribution is to make an overwiew about urban sprawl in USA, Mexico and Spain. The use of technologies related to satellite imagery (remote sensing) allow the characterization of the phenomenon of consumption, pathological or not, of land. And this analysis suggests some hypothesis about the plurality of the contemporary urbanization processes. Roughly two models stand out: On one hand, urban development based on low densities, where the unsustainable consumption of land is presented as a paradigm of economic development and, on the other hand, an urban development with a compact city model, where recycling land, and not just increasing the consumption of land, is one of the key objectives of urban policies. The work presented here, suggests that in the second model seems to appear a change in the paradigm towards a more efficient and sustainable use of the territory.
CitationArellano Ramos, Blanca; Roca Cladera, Josep. The urban sprawl: a planetary growth process?: an overview of USA, Mexico and Spain. A: International Conference Virtual City and Territory. "6to. Cogreso Internacional Ciudad y Territorio Virtual, Mexicali, 5, 6 y 7 Octubre 2010". Mexicali: UABC, 2010.
URIhttp://hdl.handle.net/2099/12722
DOI10.5821/ctv.7669
Collections
Share: