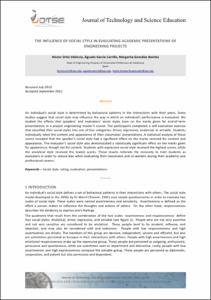 Except where otherwise noted, content on this work is licensed under a Creative Commons license : Attribution-NonCommercial 3.0 Spain
Abstract
An individual’s social style is determined by behavioral patterns in the interactions with their peers. Some studies suggest that social style may influence the way in which an individual’s performance is evaluated. We studied the effects that speakers’ and evaluators’ social styles have on the marks given for end-of-term presentations in a project engineering master’s course. The participants completed a self-evaluation exercise that classified their social styles into one of four categories: Driver, expressive, analytical, or amiable. Students individually rated the content and appearance of their classmates’ presentations. A statistical analysis of these scores revealed that the speaker’s social style had a significant effect on the marks received for content and appearance. The evaluator’s social style also demonstrated a statistically significant effect on the marks given for appearance, though not for content. Students with expressive social style received the highest scores, while the analytical style received the lowest scores. These results reiterate the necessity to train students as evaluators in order to reduce bias when evaluating their classmates and co-workers during their academic and professional careers.
CitationOrtiz Valencia, Héctor; García Carrillo, Àgueda; González Benítez, María Margarita. The influence of social style in evaluating academic presentations of engineering projects. "JOTSE: Journal of technology and science education", Setembre 2012, vol. 2, núm. 2, p. 68-76.
URIhttp://hdl.handle.net/2099/12658
ISSN2013-6474
Collections
Share: