Myths and truths about Brazilian hospitality 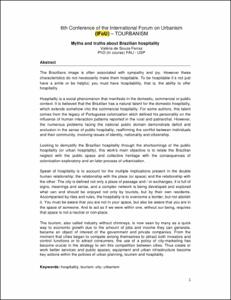 Except where otherwise noted, content on this work is licensed under a Creative Commons license : Attribution-NonCommercial-NoDerivs 3.0 Spain
Abstract
The Brazilians image is often associated with sympathy and joy. However these characteristics do not necessarily make them hospitable. To be hospitable it´s not just have a smile or be helpful, you must have hospitability, that is, the ability to offer hospitality. Hospitality is a social phenomenon that manifests in the domestic, commercial or public context. It is believed that the Brazilian has a natural talent for the domestic hospitality, which extends somehow into the commercial hospitality. For some authors, this talent comes from the legacy of Portuguese colonization witch defined his personality on the influence of human interaction patterns reported in the rural and patriarchal. However, the numerous problems facing the national public domain demonstrate deficit and exclusion in the sense of public hospitality, reaffirming the conflict between individuals and their community, involving issues of identity, nationality and citizenship. Looking to demystify the Brazilian hospitality through the shortcomings of the public hospitality (or urban hospitality), this work's main objective is to relate the Brazilian neglect with the public space and collective heritage with the consequences of colonization exploratory and an later process of urbanization. Speak of hospitality is to account for the multiple implications present in the double human relationship: the relationship with the place (or space) and the relationship with the other. The city is defined not only a place of passage and / or exchanges, it is full of signs, meanings and sense, and a complex network is being developed and explored what can and should be enjoyed not only by tourists, but by their own residents. Accompanied by rites and rules, the hospitality is to overcome a border, but not abolish it. You must be aware that you are not in your space, but also be aware that you are in the space of someone. And to act as if we were within one, without our being, requires that space is not a neutral or non-place. The tourism, also called industry without chimneys, is now seen by many as a quick way to economic growth due to the amount of jobs and income they can generate, became an object of interest of the government and private companies. From the moment that cities began to compete among themselves to attract both investors and control functions or to attract consumers, the use of a policy of city-marketing has become crucial in the strategy to win this competition between cities. Thus create or work better services and public spaces, equipment and urban infrastructure become key actions within the policies of urban planning, tourism and hospitality.
CitationFerraz, Valéria de Souza. Myths and truths about Brazilian hospitality. A: Conference of the International Forum on Urbanism. "6th Conference of the International Forum on Urbanism (IFoU): TOURBANISM, Barcelona, 25-27 gener". Barcelona: IFoU, 2012, p. 1-9.
URIhttp://hdl.handle.net/2099/12625
ISBN978-84-8157-620-7
Collections
Share: