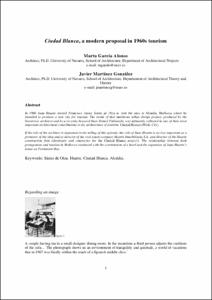 Except where otherwise noted, content on this work is licensed under a Creative Commons license : Attribution-NonCommercial-NoDerivs 3.0 Spain
Abstract
In 1960 Juan Huarte invited Francisco Javier Sáenz de Oíza to visit the sites in Alcúdia, Mallorca where he intended to promote a new city for tourism. The result of that ambitious urban design project, produced by the Navarrese architect and by a recently licensed Juan Daniel Fullaondo, was ultimately reflected in one of their most important architectural contributions to the architecture of tourism: Ciudad Blanca (White City). If the role of the architect is important in the telling of this episode, the role of Juan Huarte is no less important as a promoter of the idea and as director of the real estate company Huarte Inmobiliaria S.A. and director of the Huarte construction firm (developer and contractor for the Ciudad Blanca project). The relationship between both protagonists and tourism in Mallorca continued with the construction of a hotel and the expansion of Juan Huarte’s house on Formentor Bay.
CitationGarcía Alonso, Marta; Martínez González, Javier. Ciudad Blanca, a modern proposal in 1960s tourism. A: Conference of the International Forum on Urbanism. "6th Conference of the International Forum on Urbanism (IFoU): TOURBANISM, Barcelona, 25-27 gener". Barcelona: IFoU, 2012, p. 1-8.
URIhttp://hdl.handle.net/2099/12622
ISBN978-84-8157-620-7
Collections
Share: