The tourist and the city: on orientation in unknown urban space 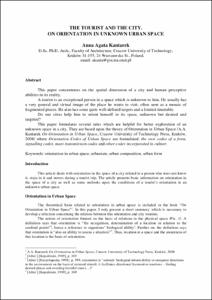 Show full item record
Kantarek, Anna Agata
Document typeConference report
PublisherInternational Forum on Urbanism
Escola Técnica Superior d'Arquitectura de Barcelona
Rights accessOpen Access
Abstract
This paper concentrates on the spatial dimension of a city and human perceptive abilities in its reality. A tourist is an exceptional person in a space which is unknown to him. He usually has a very general and virtual image of the place he wants to visit, often seen as a mosaic of fragmented pieces. He also has some quite well-defined targets and a limited timetable. Do our cities help him to orient himself in its space, unknown but desired and targeted? This paper formulates several rules which are helpful for better exploration of an unknown space in a city. They are based upon the theory of Orientation in Urban Space /A.A. Kantarek On Orientation in Urban Space, Cracow University of Technology Press, Kraków, 2008/ where Orientation Codes of Urban Space are formulated: the own codes of a form, signalling codes, mass transmission codes and other codes incorporated in culture.
CitationKantarek, Anna Agata. The tourist and the city: on orientation in unknown urban space. A: Conference of the International Forum on Urbanism. "6th Conference of the International Forum on Urbanism (IFoU): TOURBANISM, Barcelona, 25-27 gener". Barcelona: IFoU, 2012, p. 1-10.
URIhttp://hdl.handle.net/2099/12621
ISBN978-84-8157-620-7
Collections
Share: