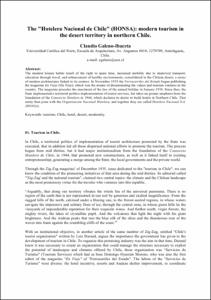 The modern leisure habits result of the right to spare time, increased mobility due to improved transport, education through travel, and enhancement of healthy environments, consolidated in the Chilean desert, a series of modern architectures linked to its context. In November 1933 the Ferrocarriles del Estado began publishing the magazine En Viaje (On Tour), which was the means of disseminating the values and tourism ventures in the country. The magazine precedes the enactment of the law of the annual holiday in January 1934. Since then, the State implemented a territorial politics implementation of tourist services, but takes on greater emphasis from the foundation of the Consorcio Hotelero in 1944, which declares its desire to build hotels in Northern Chile. That entity then joins with the Organización Nacional Hotelera, and together they are called Hotelera Nacional S.A. (HONSA).
CitationGaleno-Ibaceta, Claudio. The "Hotelera Nacional de Chile" (HONSA): modern tourism in the desert territory in northern Chile. A: Conference of the International Forum on Urbanism. "6th Conference of the International Forum on Urbanism (IFoU): TOURBANISM, Barcelona, 25-27 gener". Barcelona: IFoU, 2012, p. 1-10.
URIhttp://hdl.handle.net/2099/12615
ISBN978-84-8157-620-7