Towards the end of tourism: global architecture, fantasy and void in the age of withdrawal 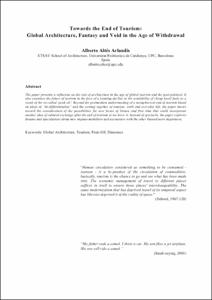 The paper presents a reflection on the role of architecture in the age of global tourism and the post-political. It also examines the future of tourism in the face of a looming decline in the availability of cheap fossil fuels as a result of the so-called ‘peak oil’. Beyond the postmodern understanding of a metaphorical end of tourism based on ideas of “de-differentiation” and the coming together of tourism, work and everyday life, the paper moves toward the consideration of the possibilities for new forms of leisure and free time that could incorporate another idea of cultural exchange after the end of tourism as we know it. Instead of spectacle, the paper explores dreams and speculations about new utopian mobilities and encounters with the other beyond mere departures.
CitationAltés Arlandis, Alberto. Towards the end of tourism: global architecture, fantasy and void in the age of withdrawal. A: Conference of the International Forum on Urbanism. "6th Conference of the International Forum on Urbanism (IFoU): TOURBANISM, Barcelona, 25-27 gener". Barcelona: IFoU, 2012, p. 1-9.
URIhttp://hdl.handle.net/2099/12614
ISBN978-84-8157-620-7