From tourist and resident to inhabitant and "inhabitantness" 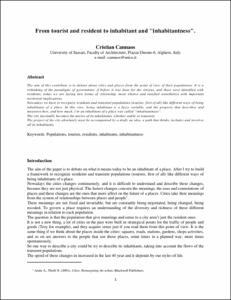 Show full item record
Cannaos, Cristian
Document typeConference report
PublisherInternational Forum on Urbanism
Escola Técnica Superior d'Arquitectura de Barcelona
Rights accessOpen Access
Abstract
The aim of this contribute is to debate about cities and places from the point of view of their populations. It is a rethinking of the paradigms of government: if before it was done for the citizens, and these were identified with residents, today we are facing new forms of citizenship, more elusive and rarefied nonetheless with important territorial implications. Nowadays we have to recognize residents and transient populations (tourists, first of all) like different ways of being inhabitants of a place. In this view, being inhabitant is a fuzzy variable, and the property that describes and measures how, and how much, I’m an inhabitant of a place was called “inhabitantness”. The city inevitably becomes the mirror of its inhabitants, whether stable or transient. The project of the city absolutely must be accompanied by a draft, an idea, a path that thinks, includes and involves all its inhabitants.
CitationCannaos, Cristian. From tourist and resident to inhabitant and "inhabitantness". A: Conference of the International Forum on Urbanism. "6th Conference of the International Forum on Urbanism (IFoU): TOURBANISM, Barcelona, 25-27 gener". Barcelona: IFoU, 2012, p. 1-10.
URIhttp://hdl.handle.net/2099/12605
ISBN978-84-8157-620-7
Collections
Share: