Tourism in Florianopolis, Brazil: landscape patrimony in the basis of a sustainable development 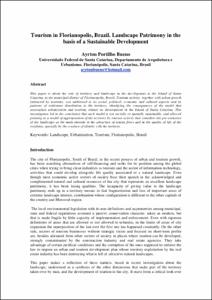 Show full item record
Bueno, Ayrton Portilho
Document typeConference report
PublisherInternational Forum on Urbanism
Escola Técnica Superior d'Arquitectura de Barcelona
Rights accessOpen Access
Abstract
This paper is about the role of territory and landscape in the development in the Island of Santa Catarina, in the municipal district of Florianopolis, Brasil. Tourism activity, together with urban growth (attracted by tourism), was addressed in its social, political, economic and cultural aspects and its patterns of settlement distribution in the territory, identifying the consequences of the model that association urbanization and tourism, orients its development in the Island of Santa Catarina. This investigation led to the conclusion that such model is not socially or spatially sustainable, and allowed pointing to a model of appropriation of the territory by tourism activity that considers the pre-eminence of the landscape as the main element in the attraction of tourist flows and in the quality of life of the residents, specially by the creation of identity with the territory.
CitationBueno, Ayrton Portilho. Tourism in Florianopolis, Brazil: landscape patrimony in the basis of a sustainable development. A: Conference of the International Forum on Urbanism. "6th Conference of the International Forum on Urbanism (IFoU): TOURBANISM, Barcelona, 25-27 gener". Barcelona: IFoU, 2012, p. 1-10.
URIhttp://hdl.handle.net/2099/12599
ISBN978-84-8157-620-7
Collections
Share: