Cultural renaissance and cultrual tourism in the City of Tainan 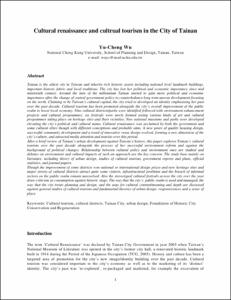 Tainan is the oldest city in Taiwan and inherits rich historic assets including national level landmark buildings, important historic fabric and local traditions. The city has lost her political and economic importance since mid nineteenth century. Around the turn of the millennium Tainan started to gain more political and economic importance after the change of central government policy to counterbalance long term uneven development focusing on the north. Claiming to be Taiwan’s cultural capital, the city tried to developed an identity emphasising her past over the past decade. Cultural tourism has been promoted alongside the city’s overall improvement of the public realm to boost local economy. Nine cultural districts/parks were identified followed with environment enhancement projects and cultural programmes; six festivals were newly formed seeing various kinds of art and cultural programmes taking place on heritage sites and their vicinities. New national museums and parks were developed elevating the city’s political and cultural status. Cultural renaissance was acclaimed by both the government and some cultural elites though with different conceptions and probably aims. A new genre of quality housing design, successful community development and a trend of innovative reuse design evolved, forming a new dimension of the city’s culture, and attracted media attention and tourists over this period. After a brief review of Tainan’s urban development against Taiwan’s history, this paper explores Tainan’s cultural tourism over the past decade alongside the process of her successful environment reform and against the background of political changes. Relationship between cultural policy and environment ones are studied and debates on environment and cultural impacts of such an approach are the key concern. The study base mainly on literature, including theory of urban design, studies of cultural tourism, government reports and plans, official statistics, and journal papers. Though the improvement of some districts won national or international design prizes and now heritage sites and major streets of cultural districts attract quite some visitors, infrastructural problems and the breach of informal sectors on the public realm remain unresolved. Also the stereotyped cultural festivals across the city over the year draw criticism as consumption against historic stage. The way that the city’s public realm is used and managed, the way that the city treats planning and design, and the urge for cultural content/meaning and depth are discussed against general studies of cultural tourism and fundamental theories of urban design- responsiveness and a sense of place.
CitationWu, Yu-Cheng. Cultural renaissance and cultrual tourism in the City of Tainan. A: Conference of the International Forum on Urbanism. "6th Conference of the International Forum on Urbanism (IFoU): TOURBANISM, Barcelona, 25-27 gener". Barcelona: IFoU, 2012, p. 1-9.
URIhttp://hdl.handle.net/2099/12597
ISBN978-84-8157-620-7