A common vision for the Dabube Region: chance or risk for a tourism oriented urban development of Brăila 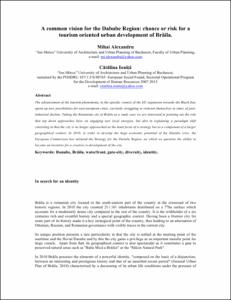 Show full item record
Alexandru, Mihai
Ioniţă, Cătălina
Document typeConference report
PublisherInternational Forum on Urbanism
Escola Técnica Superior d'Arquitectura de Barcelona
Rights accessOpen Access
Abstract
The advancement of the tourism phenomena, in the specific context of the EU expansion towards the Black Sea, opens up new possibilities for east-european cities, currently struggling to reinvent themselves in times of postindustrial decline. Taking the Romanian city of Brăila as a study case we are interested in pointing out the role that top down approaches have on engaging new local energies, but also in explaining a paradigm shift consisting in that the city is no longer approached as the main focus of a strategy but as a component of a larger geographical context. In 2010, in order to develop the huge economic potential of the Danube river, the European Commission has initiated the Strategy for the Danube Region, on which we question the ability to become an incentive for a creative re-development of the city.
CitationAlexandru, Mihai; Ioniţă, Cătălina. A common vision for the Dabube Region: chance or risk for a tourism oriented urban development of Brăila. A: Conference of the International Forum on Urbanism. "6th Conference of the International Forum on Urbanism (IFoU): TOURBANISM, Barcelona, 25-27 gener". Barcelona: IFoU, 2012, p. 1-7.
URIhttp://hdl.handle.net/2099/12581
ISBN978-84-8157-620-7
Collections
Share: