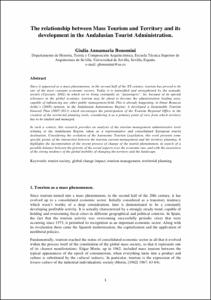 Show full item record
Bonomini, Giulia Annamaria
Document typeConference report
PublisherInternational Forum on Urbanism
Escola Técnica Superior d'Arquitectura de Barcelona
Rights accessOpen Access
Abstract
Since it appeared as a mass phenomenon, in the second half of the XX century, tourism has proved to be one of the most constant economic sectors. Today it is intensified and strengthened by the nomadic society (Cacciari, 2002) in which we’re living constantly as “passengers”. So, because of its special relevance in the global economy, tourism may be about to become the administration leading area, capable of influencing any other public management field. This is already happening, in Omar Bouazza Ariño’s (2009) opinion, in the Andalusian Autonomous Region: it developed a Sustainable Tourism General Plan (2007-2011) which encourages the participation of the Tourism Regional Office in the creation of the territorial planning tools, considering it as a primary point of view from which territory has to be studied and managed. In such a context, this research provides an analysis of the tourism management administrative tools relating to the Andalusian Region, taken as a representative and consolidated European tourist destination. Considering the evolution of the Autonomic Tourism Legislation, this work presents some specific points of the interaction between the tourism current management and the territory planning. It highlights the incorporation of the recent process of change of the tourist phenomenon, in search of a possible balance between the priority of the social aspects over the economic one, and with the awareness of the strong tendency of the global mobility of changing the territory and the landscape.
CitationBonomini, Giulia Annamaria. The relationship between mass tourism and territory and its development in the Andalusian Tourist Administration. A: Conference of the International Forum on Urbanism. "6th Conference of the International Forum on Urbanism (IFoU): TOURBANISM, Barcelona, 25-27 gener". Barcelona: IFoU, 2012, p. 1-9.
URIhttp://hdl.handle.net/2099/12577
ISBN978-84-8157-620-7
Collections
Share: