Industrial tourism: when the industry becomes a chance for tourism 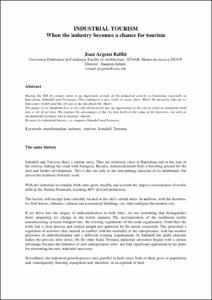 Show full item record
Argemí Ballbè, Joan
Document typeConference report
PublisherInternational Forum on Urbanism
Escola Técnica Superior d'Arquitectura de Barcelona
Rights accessOpen Access
Abstract
During the XIX th century there is an important growth of the industrial activity in Catalonia (specially in Barcelona, Sabadell and Terrassa). This configures a new order in some cities. When the factories shut up we find a new reality and the city has to decide about the future. The paper try to enlighten how a city with old factories has an opportunity to the city in order to transform itself into a city of services. We explain the advantages of the city that looks to the value of the factories, not only as an industrial heritage, but as touristic chance. Because its industrial history, we compare Sabadell and Terrassa.
CitationArgemí Ballbè, Joan. Industrial tourism: when the industry becomes a chance for tourism. A: Conference of the International Forum on Urbanism. "6th Conference of the International Forum on Urbanism (IFoU): TOURBANISM, Barcelona, 25-27 gener". Barcelona: IFoU, 2012, p. 1-9.
URIhttp://hdl.handle.net/2099/12576
ISBN978-84-8157-620-7
Collections
Share: