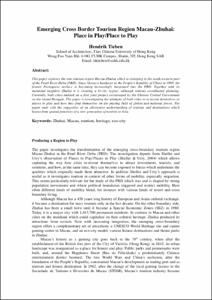 Show full item record
Tieben, Hendrik
Document typeConference report
PublisherInternational Forum on Urbanism
Escola Técnica Superior d'Arquitectura de Barcelona
Rights accessOpen Access
Abstract
This paper explores the new tourism region Macau-Zhuhai which is emerging in the south-western part of the Pearl River Delta (PRD). Since Macau’s handover to the People’s Republic of China in 1999, the former Portuguese enclave is becoming increasingly integrated into the PRD. Together with its mainland neighbor Zhuhai it is creating a bi-city region; although without coordinated planning. Currently, both cities embark on a first joint project encouraged by the Chinese Central Government on the island Hengqin. The paper is investigating the attempts of both cities to re-invent themselves as places to play and how they find themselves on the playing field of global and national forces. The paper ends with the suggestion of an alternative understanding of tourism and destinations which learns from spatial practices of a new generation of tourists in Asia.
CitationTieben, Hendrik. Emerging cross border tourism Region Macau-Zhuhai: place in play/place to play. A: Conference of the International Forum on Urbanism. "6th Conference of the International Forum on Urbanism (IFoU): TOURBANISM, Barcelona, 25-27 gener". Barcelona: IFoU, 2012, p. 1-10.
URIhttp://hdl.handle.net/2099/12575
ISBN978-84-8157-620-7
Collections
Share: