A century of tourism in Europe: new challenges to the discipline of urbanism 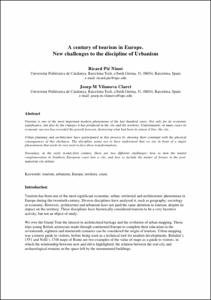 Document typeConference report
PublisherInternational Forum on Urbanism
Escola Técnica Superior d'Arquitectura de Barcelona
Rights accessOpen Access
Abstract
Tourism is one of the most important modern phenomena of the last hundred years. Not only for its economic significance, but also by the changes it has produced in the city and the territory. Unfortunately, in many cases its economic success has exceeded the growth forecast, destroying what had been its raison d’être: the city. Urban planning and architecture have participated in this process by showing their contempt with the physical consequences of this slackness. The discipline seems not to have understood that we are in front of a major phenomenon that needs its own tools to face these transformations. Nowadays, in the early twenty-first century, there are two different challenges: how to turn the tourist conglomeration in Southern European coast into a city, and how to include the matter of leisure in the postindustrial city debate.
CitationPié Ninot, Ricard; Vilanova Claret, Josep Maria. A century of tourism in Europe: new challenges to the discipline of urbanism. A: Conference of the International Forum on Urbanism. "6th Conference of the International Forum on Urbanism (IFoU): TOURBANISM, Barcelona, 25-27 gener". Barcelona: IFoU, 2012, p. 1-6.
URIhttp://hdl.handle.net/2099/12572
ISBN978-84-8157-620-7
Collections
Share: