The tourism value of national heritages in the urban development in Kaohsiung City, Taiwan 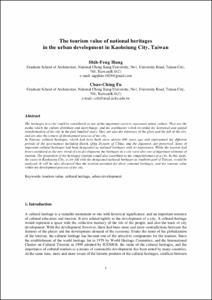 Show full item record
Hung, Shih-Feng
Fu, Chao-Ching
Document typeConference report
PublisherInternational Forum on Urbanism
Escola Técnica Superior d'Arquitectura de Barcelona
Rights accessOpen Access
Abstract
The heritages in a city could be considered as one of the important carriers represents urban culture. They are the media which the culture distribute and interchange, and the testimonies which recorded the historical and spatial transformation of the city in the past hundred years. They are also the witnesses of the glory and the fall of the city, and are also the witness of development process of the city. In Taiwan, cultural heritages, which had been built since almost 400 years ago and represented the different periods of the governances including Dutch, Qing Dynasty of China, and the Japanese, are preserved. Some of important cultural heritages had been designated as national heritages with its importance. While the tourism had been considered as the new trend of city development, the heritages in a city were also one of important elements of tourism. The promotion of the heritages tourism would also contribute to the competitiveness of a city. In this study, the cases in Kaohsiung City, a city full with the designated national heritages in southern part of Taiwan, would be analyzed. It will be also discussed that the tourism potential for these national heritages, and the tourism value within the development process of the city.
CitationHung, Shih-Feng; Fu, Chao-Ching. The tourism value of national heritages in the urban development in Kaohsiung City, Taiwan. A: Conference of the International Forum on Urbanism. "6th Conference of the International Forum on Urbanism (IFoU): TOURBANISM, Barcelona, 25-27 gener". Barcelona: IFoU, 2012, p. 1-10.
URIhttp://hdl.handle.net/2099/12570
ISBN978-84-8157-620-7
Collections
Share: