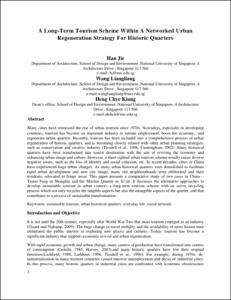 Many cities have witnessed the rise of urban tourism since 1970s. Nowadays, especially in developing countries, tourism has become an important industry to initiate employment, boost the economy, and regenerate urban quarters. Recently, tourism has been included into a comprehensive process of urban regeneration of historic quarters, and is becoming closely related with other urban planning strategies, such as conservation and creative industry (Tiesdell et al., 1996, Cunningham, 2002). Many historical quarters have been transformed into tourist destination with the aim of reviving the economy and enhancing urban image and culture. However, a short-sighted urban tourism scheme usually raises diverse negative issues, such as the loss of identity and social cohesion, etc. In recent decades, cities in China have experienced huge urban changes. As many urban historical quarters were demolished to facilitate rapid urban development and new city image, many old neighbourhoods were obliterated and their residents, relocated to fringe areas. This paper presents a comparative study of two cases in China— Tianzi Fang in Shanghai and the Muslim Quarter in Xi’an. It discusses the alternative approaches to develop sustainable tourism in urban context: a long-term tourism scheme with an active recycling process which not only recycles the tangible aspects but also the intangible aspects of the quarter, and that contributes to a process of sustainable transformation.
CitationJie, Han; Liangliang, Wang; Chye Kiang, Heng. A long-term tourism scheme within a networked urban regeneration strategy for historic quarters. A: Conference of the International Forum on Urbanism. "6th Conference of the International Forum on Urbanism (IFoU): TOURBANISM, Barcelona, 25-27 gener". Barcelona: IFoU, 2012, p. 1-14.
URIhttp://hdl.handle.net/2099/12568
ISBN978-84-8157-620-7