City of museums: museum cluster as a manifesto of the paradigm shift 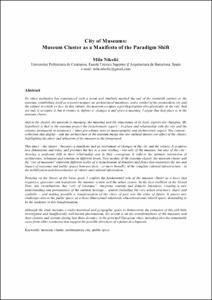 Show full item record
Nikolić, Mila
Document typeConference report
PublisherInternational Forum on Urbanism
Escola Técnica Superior d'Arquitectura de Barcelona
Rights accessOpen Access
Abstract
No other institution has experienced such a boom and similarly marked the end of the twentieth century as the museum, establishing itself as a tourist magnet, an architectural manifesto, and a symbol of the postmodern city and the culture in which we live. In this culture, the museum occupies a privileged place also physically, in the city. And not only it occupies it, but it creates it, defines it, changes it and gives it meaning. I argue that that place is in the museum cluster. And in the cluster, the museum is changing; the meaning and the importance of its basic aspects are changing. My hypothesis is that in the museum project the (to)urbanistic aspect - its place and relationship with the city and the citizens, permanent or temporary - takes precedence over its museographic and architectonic aspect. The content - collection and display - and the architecture of the museum merge into the cultural density (or offer) of the cluster, highlighting the place and urbanism of the museum in the foreground. This place - the cluster - becomes a manifesto and an instrument of changes in the city and the society. It acquires new dimensions and roles, and provides the key to a new reading - not only of the museum, but also of the city - showing a profound shift in their relationship and in their conception. It reflects the intimate interaction of architecture, urbanism and tourism on different levels. New models of the museum-cluster, the museum cluster and the "city of museums" represent different scales of a (to)urbanism of densities and flows that maximizes the use and impact of museums and public spaces between them - or more broadly, of the complete cultural infrastructure - in the mobilization and dissemination of culture and cultural information. Drawing on the theory of the locus genii, I confirm the fundamental role of the museum cluster as a force that organizes, generates and transforms the museum system and the urban system. In the best tradition of the Grand Tour, this (to)urbanism, this “city of museums”, integrates tourism and didactic intentions, creating a new understanding and presentation of the cultural heritage – spatial (including the very urban structure), object and symbolic – and making possible a transformation of the cities of past into the cities of future. It places new challenges also to the public space, as a three dimensional relational, educational and cultural space, demanding to be the mediator in this transformation. Although the study includes a wider historical and geographic space to demonstrate the extension of this still little investigated and insufficiently well-known phenomenon, the accent is on the transformations of the museums and their clusters and systems during last three decades, in the principal European cities, including also the remarkable cases from other continents that suggest the possible directions of a future development.
CitationNikolić, Mila. City of museums: museum cluster as a manifesto of the paradigm shift. A: Conference of the International Forum on Urbanism. "6th Conference of the International Forum on Urbanism (IFoU): TOURBANISM, Barcelona, 25-27 gener". Barcelona: IFoU, 2012, p. 1-10.
URIhttp://hdl.handle.net/2099/12564
ISBN978-84-8157-620-7
Collections
Share: