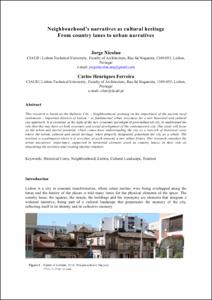 Show full item record
Nicolau, Jorge
Ferreira, Carlos Henriques
Document typeConference report
PublisherInternational Forum on Urbanism
Escola Técnica Superior d'Arquitectura de Barcelona
Rights accessOpen Access
Abstract
This research is based on the dialectic City – Neighbourhood, focusing on the importance of the ancient rural settlements – important districts of Lisbon – as fundamental urban structures for a new historical and cultural city approach. It is essential, in the light of the new economic paradigm of post-industrial city, to understand the role that this may have on both economic and social development of the contemporary city. Our study will focus on the urban and tourist potential, which comes from understanding the city as a network of historical cores where the urban, cultural and social heritage, when properly integrated, potentiate the city as a whole. The territory is a palimpsest where it is rewritten, at each moment, a new urban history. Our research considers the urban narratives’ importance, supported in territorial elements (such as country lanes), in their role on structuring the territory and creating identity relations.
CitationNicolau, Jorge; Ferreira, Carlos Henriques. Neighbourhood’s narratives as cultural heritage: from country lanes to urban narratives. A: Conference of the International Forum on Urbanism. "6th Conference of the International Forum on Urbanism (IFoU): TOURBANISM, Barcelona, 25-27 gener". Barcelona: IFoU, 2012, p. 1-7.
URIhttp://hdl.handle.net/2099/12562
ISBN978-84-8157-620-7
Collections
Share: