Branding the "White City": touristic films and the portrayal of modern Athens in the 1950s and 1960s 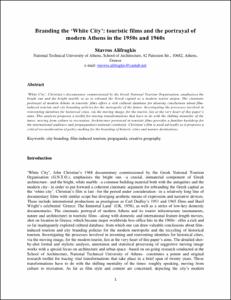 Show full item record
Alifragkis, Stavros
Document typeConference report
PublisherInternational Forum on Urbanism
Escola Técnica Superior d'Arquitectura de Barcelona
Rights accessOpen Access
Abstract
"White City", Christian’s documentary commissioned by the Greek National Tourism Organisation, emphasises the bright sun and the bright marble so as to rebrand the Greek capital as a modern tourist utopia. The cinematic portrayal of modern Athens in touristic films offers a rich cultural database for drawing conclusions about film-induced tourism and city branding policies for the metropolis of the future. Investigating the processes involved in reinventing identities for historical cities, via the moving image, for the tourist, lies at the very heart of this paper’s aims. This analysis proposes a toolkit for tracing transformations that have to do with the shifting mentality of the times: moving from culture to recreation. Architecture portrayed in touristic films provides a familiar backdrop for the international audience and propagandises national continuity. Christian’s film is used advisedly as it proposes a critical reconsideration of policy-making for the branding of historic cities and mature destinations.
CitationAlifragkis, Stavros. Branding the "White City": touristic films and the portrayal of modern Athens in the 1950s and 1960s. A: Conference of the International Forum on Urbanism. "6th Conference of the International Forum on Urbanism (IFoU): TOURBANISM, Barcelona, 25-27 gener". Barcelona: IFoU, 2012, p. 1-10.
URIhttp://hdl.handle.net/2099/12558
ISBN978-84-8157-620-7
Collections
Share: