Planning the portuguese "Riviera": the expectations of the touristic-urbanistic developments of "Costa do Sol": Lisbon-Cascais 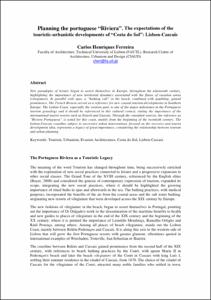 New paradigms of leisure began to assert themselves in Europe, throughout the nineteenth century, highlighting the importance of new territorial dynamics associated with the fluxes of vacation areas (vilegiature). In parallel with spas, a “bathing cult” in the beach, combined with gambling, gained prominence. The French Riviera served as a reference for new coastal tourism developments in Southern Europe. The Lisbon Coast, especially the western part, is one of the major milestones in the Portuguese tourism genealogy and it should be referenced in this cultural context, stating the importance of the international tourist resorts such as Estoril and Cascais. Through the consulted sources, the reference as “Riviera Portuguesa” is noted for this coast, mainly from the beginning of the twentieth century. The Lisbon-Cascais coastline subject to successive urban interventions, focused on the recovery and tourist development idea, represents a legacy of great importance, considering the relationship between tourism and urban planning.
CitationFerreira, Carlos Henriques. Planning the portuguese "Riviera": the expectations of the touristic-urbanistic developments of "Costa do Sol": Lisbon-Cascais. A: Conference of the International Forum on Urbanism. "6th Conference of the International Forum on Urbanism (IFoU): TOURBANISM, Barcelona, 25-27 gener". Barcelona: IFoU, 2012, p. 1-9.
URIhttp://hdl.handle.net/2099/12547
ISBN978-84-8157-620-7