Varig case: the downfall of a Brazilian icon 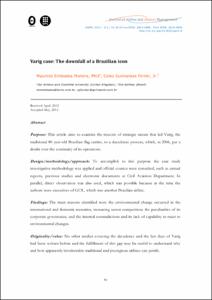 Except where otherwise noted, content on this work is licensed under a Creative Commons license : Attribution-NonCommercial 3.0 Generic
Abstract
Purpose: This article aims to examine the reasons of strategic nature that led Varig, the traditional 80 year-old Brazilian flag carrier, to a decadence process, which, in 2006, put a doubt over the continuity of its operations. Design/methodology/approach: To accomplish to this purpose the case study investigative methodology was applied and official sources were consulted, such as annual reports, previous studies and electronic documents at Civil Aviation Department. In parallel, direct observation was also used, which was possible because at the time the authors were executives of GOL, which was another Brazilian airline. Findings: The main reasons identified were the environmental change occurred in the international and domestic scenarios, increasing sector competition; the peculiarities of its corporate governance; and the internal contradictions and its lack of capability to react to environmental changes. Originality/value: No other studies covering the decadence and the last days of Varig had been written before and the fulfillment of this gap may be useful to understand why and how apparently invulnerable traditional and prestigious airlines can perish.
CitationEmboaba Moreira, Mauricio; Guimaraes Ferrer, Celso Jr. Varig case: the downfall of a Brazilian icon. "Journal of Airline and Airport Management", Maig 2012, vol. 2, núm. 1, p. 51-66.
URIhttp://hdl.handle.net/2099/12282
DOI10.3926/jairm.6
ISSN2014-4806
Collections
Share: