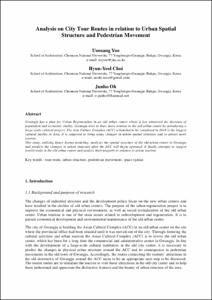 Gwangju has a plan for Urban Regeneration in an old urban center where it has witnessed the decrease of population and economic vitality, Gwangju tries to draw more tourists to the old urban center by introducing a large-scale cultural project. The Asia Culture Complex (ACC) scheduled to be completed in 2014 is the biggest cultural facility in Asia. It is supposed to bring many changes in urban spatial structure and to attract more tourists. This study, utilizing Space Syntax modeling, analyzes the spatial structure of the old urban center in Gwangju and predicts the changes in urban structure after the ACC will begin operated. It finally attempts to suggest tourist trails in the old urban center and analyze their property in relation to urban tourism.
CitationUoosang, Yoo; Choi, Hyun-Yeol; Oh, Junho. Analysis on city tour routes in relation to urban spatial structure and pedestrian movement. A: Conference of the International Forum on Urbanism. "6th Conference of the International Forum on Urbanism (IFoU): TOURBANISM, Barcelona, 25-27 gener". Barcelona: IFoU, 2012, p. 1-10.
URIhttp://hdl.handle.net/2099/12272
ISBN978-84-8157-620-7