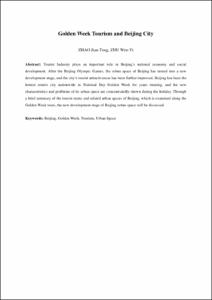 Tourist Industry plays an important role in Beijing’s national economy and social development. After the Beijing Olympic Games, the urban space of Beijing has turned into a new development stage, and the city’s tourist attractiveness has been further improved. Beijing has been the hottest tourist city nationwide in National Day Golden Week for years running, and the new characteristics and problems of its urban space are concentratedly shown during the holiday. Through a brief summary of the tourist status and related urban spaces of Beijing, which is examined along the Golden Week tours, the new development stage of Beijing urban space will be discussed
CitationZhao, Jian-Tong; Zhu, Wen-Yi. Golden Week Tourism and Beijing City. A: Conference of the International Forum on Urbanism. "6th Conference of the International Forum on Urbanism (IFoU): TOURBANISM, Barcelona, 25-27 gener". Barcelona: IFoU, 2012, p. 1-17.
URIhttp://hdl.handle.net/2099/12249
ISBN978-84-8157-620-7