New holiday towns as Non-places: the case of Marina d'Or 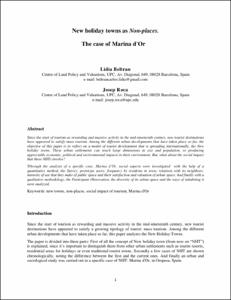 Document typeConference report
PublisherInternational Forum on Urbanism
Escola Técnica Superior d'Arquitectura de Barcelona
Rights accessOpen Access
Abstract
Since the start of tourism as rewarding and massive activity in the mid-nineteenth century, new tourist destinations have appeared to satisfy mass tourism. Among the different urban developments that have taken place so far, the objective of this paper is to reflect on a model of tourist development that is spreading internationally, the New holiday towns. These urban settlements can reach large dimensions in size and population, so producing appreciable economic, political and environmental impacts in their environment. But, what about the social impact that these NHTs involve? Tthrough the analysis of a specific case, Marina d’Or, social aspects were investigated with the help of a quantitative method, the Survey: prototype users; frequency by residents in town; relations with its neighbors; intensity of use that they make of public space and their satisfaction and valuation of urban space. And finally with a qualitative methodology, the Participant Observation, the diversity of its urban space and the ways of inhabiting it were analyzed.
CitationBeltran, Lidia; Roca Cladera, José Nicasio. New holiday towns as Non-places: the case of Marina d'Or. A: Conference of the International Forum on Urbanism. "6th Conference of the International Forum on Urbanism (IFoU): TOURBANISM, Barcelona, 25-27 gener". Barcelona: IFoU, 2012, p. 1-10.
URIhttp://hdl.handle.net/2099/12246
ISBN978-84-8157-620-7
Collections
Share: