Tourism and the city image: the Barcelona Olympic case 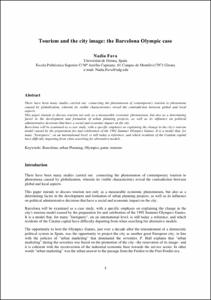 There have been many studies carried out connecting the phenomenon of contemporary tourism to phenomena caused by globalization, wherein its visible characteristics reveal the contradiction between global and local aspects. This paper intends to discuss tourism not only as a measurable economic phenomenon, but also as a determining factor in the development and formation of urban planning projects, as well as its influence on political administrative decisions that have a social and economic impact on the city. Barcelona will be examined as a case study, with a specific emphasis on explaining the change in the city's tourism model caused by the preparation for and celebration of the 1992 Summer Olympics Games. It is a model that, for many "foreigners", on an international level, is still today a reference, and which residents of the Catalan capital have difficulty departing from when searching for alternative models.
CitationFava, Nadia. Tourism and the city image: the Barcelona Olympic case. A: Conference of the International Forum on Urbanism. "6th Conference of the International Forum on Urbanism (IFoU): TOURBANISM, Barcelona, 25-27 gener". Barcelona: IFoU, 2012, p. 1-10.
URIhttp://hdl.handle.net/2099/12154
ISBN978-84-8157-620-7