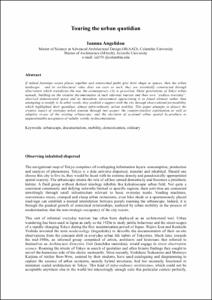 Show full item record
Angelidou, Ioanna
Document typeConference report
PublisherInternational Forum on Urbanism
Escola Técnica Superior d'Arquitectura de Barcelona
Rights accessOpen Access
Abstract
If indeed footsteps weave places together and intertwined paths give their shape to spaces, then the urban landscape and its architectural value does not exist as such, they are essentially constructed through observation which transforms the way the contemporary city is perceived. Three generations of Tokyo urban nomads, building on the creative documentation of such informal tourism and their own “endless everyday”, observed domesticated space and its immediate environment appreciating it as found element rather than attempting to modify it. In other words, they enabled a rapport with the city through observational permeability, which highlighted their quotidian, almost infra-ordinary, urban mobility. This paper attempts to dissect the creative aspect of everyday urban tourism through two scopes: the counter-intuitive exploitation as well as adaptive re-use of the existing urbanscape; and the elevation of as-found urban spatial by-products to unquestionable acceptance of validity worthy of documentation.
CitationAngelidou, Ioanna. Touring the urban quotidian. A: Conference of the International Forum on Urbanism. "6th Conference of the International Forum on Urbanism (IFoU): TOURBANISM, Barcelona, 25-27 gener". Barcelona: IFoU, 2012, p. 1-10.
URIhttp://hdl.handle.net/2099/12148
ISBN978-84-8157-620-7
Collections
Share: