City’s imaginary / imaginary for the city: the paradigm of the commercial image in the tourist city: Barcelona case 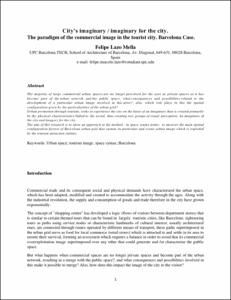 Show full item record
Lazo Mella, Felipe
Document typeConference report
PublisherInternational Forum on Urbanism
Escola Técnica Superior d'Arquitectura de Barcelona
Rights accessOpen Access
Abstract
The majority of large commercial urban spaces are no longer perceived for the user as private spaces as it has become part of the urban network and the public space: what consequences and possibilities related to the development of a particular urban image involved in this arise?, also, which role plays in this the spatial configuration given by the particularities of the urban grid? Urban promotion through tourism, seeks to experience the city on the basis of an imaginary that is created primarily by the physical characteristics linked to the social, thus creating two groups of visual perception: An imaginary of the city and imagery for the city. The aim of this research is to show an approach to the method - in space syntax terms- to uncover the main spatial configuration factors of Barcelona urban grid that sustain its particular and iconic urban image which is exploded by the tourism attraction entities.
CitationLazo Mella, Felipe. City’s imaginary / imaginary for the city: the paradigm of the commercial image in the tourist city: Barcelona case. A: Conference of the International Forum on Urbanism. "6th Conference of the International Forum on Urbanism (IFoU): TOURBANISM, Barcelona, 25-27 gener". Barcelona: IFoU, 2012, p. 1-6.
URIhttp://hdl.handle.net/2099/12014
ISBN978-84-8157-620-7
Collections
Share: