Coprivacy: an introduction to the theory and applications of co-operative privacy 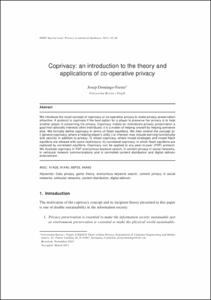 Show full item record
Domingo-Ferrer, Josep
Document typeArticle
PublisherInstitut d'Estadística de Catalunya
Rights accessOpen Access
Abstract
We introduce the novel concept of coprivacy or co-operative privacy to make privacy preservation attractive. A protocol is coprivate if the best option for a player to preserve her privacy is to help another player in preserving his privacy. Coprivacy makes an individual’s privacy preservation a goal that rationally interests other individuals: it is a matter of helping oneself by helping someone else. We formally define coprivacy in terms of Nash equilibria. We then extend the concept to: i) general coprivacy, where a helping player’s utility (i.e. interest) may include earning functionality and security in addition to privacy; ii) mixed coprivacy, where mixed strategies and mixed Nash equilibria are allowed with some restrictions; iii) correlated coprivacy, in which Nash equilibria are replaced by correlated equilibria. Coprivacy can be applied to any peer-to-peer (P2P) protocol. We illustrate coprivacy in P2P anonymous keyword search, in content privacy in social networks, in vehicular network communications and in controlled content distribution and digital oblivion enforcement
CitationDomingo-Ferrer, Josep. Coprivacy: an introduction to the theory and applications of co-operative privacy. "SORT", Special Issue, p. 25-40.
URIhttp://hdl.handle.net/2099/11414
ISSN1696-2281
Collections
Share: