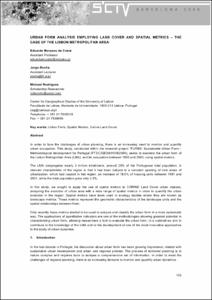 In order to face the challenges of urban planning, there is an increasing need to monitor and quantify urban occupation. This study, conducted within the research project "FURBS: Sustainable Urban Form - Methodological development for Portugal (PTDC/GEO/69109/2006), seeks to examine the urban form of the Lisbon Metropolitan Area (LMA), and its occupation between 1990 and 2000, using spatial metrics. The LMA congregates nearly 3 million inhabitants, around 26% of the Portuguese total population. A relevant characteristic of the region is that it has been subject to a constant opening of new areas of urbanization, which had caused in this region, an increase of 18.6% of housing units between 1991 and 2001, while the total population grew only 4.3%. In this study, we sought to apply the use of spatial metrics to CORINE Land Cover urban classes, analysing the evolution of urban area with a wide range of spatial metrics in order to quantify the urban evolution in the region. Spatial metrics have been used in ecology studies where they are known as landscape metrics. These metrics represent the geometric characteristics of the landscape units and the spatial relationships between them. Only recently these metrics started to be used to analyse and classify the urban form in a more systematic way. The applications of quantitative indicators are one of the methodologies showing greatest potential in characterizing urban form, allowing researchers a tool to evaluate the urban form. In a nutshell we aim to contribute to the knowledge of the LMA and to the development of one of the most innovative approaches to the study of urban dynamics.
CitationMarques da Costa, Eduarda; Rocha, Jorge; Rodrigues, Michael. Urban form analysis employing land cover and spatial metrics: the case of the Lisbon Metropolitan Area. A: International Conference Virtual City and Territory. "5th International Conference Virtual City and Territory, Barcelona, 2,3 and 4 June 2009". Barcelona: Centre de Política de Sòl i Valoracions, 2009, p. 133-144.
URIhttp://hdl.handle.net/2099/11349
ISBN978-84-8157-601-6