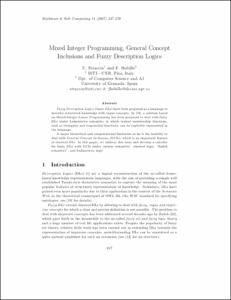 Fuzzy Description Logics (fuzzy DLs) have been proposed as a language to describe structured knowledge with vague concepts. In [19], a solution based on Mixed Integer Linear Programming has been proposed to deal with fuzzy DLs under Lukasiewicz semantics in which typical membership functions, such as triangular and trapezoidal functions, can be explicitly represented in the language. A major theoretical and computational limitation so far is the inability to deal with General Concept Inclusions (GCIs), which is an important feature of classical DLs. In this paper, we address this issue and develop a calculus for fuzzy DLs with GCIs under various semantics: classical logic, \Zadeh semantics", and Lukasiewicz logic.
CitationStraccia, U.; Bobillo, F. Mixed integer programming, general concept inclusions and fuzzy description logics. "Mathware & Soft Computing", vol. 14, núm. 3, p. 247-259.
URIhttp://hdl.handle.net/2099/11013
ISSN1134-5632