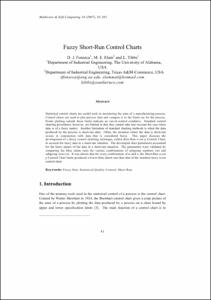 Statistical control charts are useful tools in monitoring the state of a manufacturing process. Control charts are used to plot process data and compare it to the limits set for the process. Points plotting outside these limits indicate an out-of-control condition. Standard control charting procedures, however, are limited in that they cannot take into account the case when data is of a fuzzy nature. Another limitation of standard charting methods is when the data produced by the process is short-run data. Often, the situation where the data is short-run occurs in conjunction with data that is considered fuzzy. This paper dicusses the development of a fuzzy control chartting technique, called short-Run α-cut p Control Chart, to account for fuzzy data in a short-run situation. The developed chart parameters accounted for the fuzzy nature of the data in a short-run situation. The parameters were validated by comparing the false alarm rates for various combinations of subgroup numbers (m) and subgroup sizes (n). It was shown that for every combination of m and n, the Short-Run α-cut p Control Chart limits produced a lower false alarm rate than that of the standard fuzzy α-cut control chart.
CitationFonseca, D. J.; Elam, M. E.; Tibbs, L. Fuzzy short-run control charts. "Mathware & Soft Computing", 2007, vol. 14, núm. 2, p. 81-101.
URIhttp://hdl.handle.net/2099/10935
ISSN1134-5632