Algorithms for classification based on k-NN 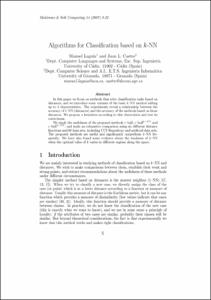 Except where otherwise noted, content on this work is licensed under a Creative Commons license : Attribution-NonCommercial-NoDerivs 3.0 Spain
Abstract
In this paper we focus on methods that solve classification tasks based on distances, and we introduce some variants of the basic k-NN method adding up to 3 characteristics. The experiments reveal a relationship between the accuracy of 1-NN (distances) and the accuracy of the methods based on those distances. We propose a heuristics according to this observation and test its correctness. We study the usefulness of the proposed methods epsilon-ball, epsilon-ball^{k-NN} and epsilon-ball^{1-NN}, and make an exhaustive comparison using six different distance functions and 68 data sets, including UCI--Repository and artificial data sets. The proposed methods are useful and significantly outperform k-NN frequently. We have also found some evidence about the weakness of k-NN when the optimal value of $k$ varies in different regions along the space.
CitationLaguía, Manuel; Castro, Juan L. Algorithms for classification based on k-NN. "Mathware & Soft Computing", 2007, vol. 14, núm. 1, p. 5-22.
URIhttp://hdl.handle.net/2099/10929
ISSN1134-5632
Collections
Share: