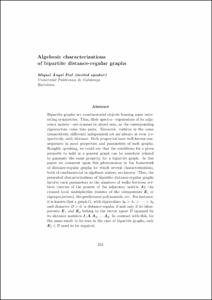 Bipartite graphs are combinatorial objects bearing some interesting symmetries. Thus, their spectra—eigenvalues of its adjacency matrix—are symmetric about zero, as the corresponding eigenvectors come into pairs. Moreover, vertices in the same (respectively, different) independent set are always at even (respectively, odd) distance. Both properties have well-known consequences in most properties and parameters of such graphs. Roughly speaking, we could say that the conditions for a given property to hold in a general graph can be somehow relaxed to guaranty the same property for a bipartite graph. In this paper we comment upon this phenomenon in the framework of distance-regular graphs for which several characterizations, both of combinatorial or algebraic nature, are known. Thus, the presented characterizations of bipartite distance-regular graphs involve such parameters as the numbers of walks between vertices (entries of the powers of the adjacency matrix A), the crossed local multiplicities (entries of the idempotents $E_i$ or eigenprojectors), the predistance polynomials, etc. For instance, it is known that a graph G, with eigenvalues $λ_0$ > $λ_1$ > · · · > $λ_d$ and diameter D = d, is distance-regular if and only if its idempotents $E_1$ and $E_d$ belong to the vector space D spanned by its distance matrices I,A,$A_2$, . . .$A_d$. In contrast with this, for the same result to be true in the case of bipartite graphs, only $E_1$ ∈ D need to be required.
Related documenthttp://hdl.handle.net/2099.2/1750
CitationFiol Mora, Miquel Àngel. Algebraic characterizations of bipartite distance-regular graphs. A: International Workshop on Optimal Networks Topologies. "Proceedings of the 3rd International Workshop on Optimal Networks Topologies IWONT 2010". Barcelona: Iniciativa Digital Politècnica, 2011, p. 253-264.
URIhttp://hdl.handle.net/2099/10389
ISBN978-84-7653-565-3