An overview of the degree/diameter problem for directed, undirected and mixed graphs 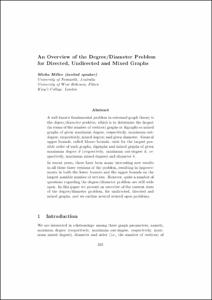 A well-known fundamental problem in extremal graph theory is the degree/diameter problem, which is to determine the largest (in terms of the number of vertices) graphs or digraphs or mixed graphs of given maximum degree, respectively, maximum outdegree, respectively, mixed degree; and given diameter. General upper bounds, called Moore bounds, exist for the largest possible order of such graphs, digraphs and mixed graphs of given maximum degree d (respectively, maximum out-degree d, respectively, maximum mixed degree) and diameter k. In recent years, there have been many interesting new results in all these three versions of the problem, resulting in improvements in both the lower bounds and the upper bounds on the largest possible number of vertices. However, quite a number of questions regarding the degree/diameter problem are still wide open. In this paper we present an overview of the current state of the degree/diameter problem, for undirected, directed and mixed graphs, and we outline several related open problems.
CitationMiller, Mirka. An overview of the degree/diameter problem for directed, undirected and mixed graphs. A: International Workshop on Optimal Networks Topologies. "Proceedings of the 3rd International Workshop on Optimal Networks Topologies IWONT 2010". Barcelona: Iniciativa Digital Politècnica, 2011, p. 335-345.
URIhttp://hdl.handle.net/2099/10382
ISBN978-84-7653-565-3