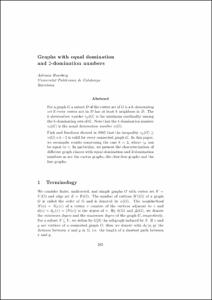 For a graph G a subset D of the vertex set of G is a k-dominating set if every vertex not in D has at least k neighbors in D. The k-domination number γk(G) is the minimum cardinality among the k-dominating sets of G. Note that the 1-domination number $γ_1(G)$ is the usual domination number γ(G). Fink and Jacobson showed in 1985 that the inequality γk(G) ≥ γ(G)+k−2 is valid for every connected graph G. In this paper, we recompile results concerning the case k = 2, where γk can be equal to γ. In particular, we present the characterization of different graph classes with equal domination and 2-domination numbers as are the cactus graphs, the claw-free graphs and the line graphs.
CitationHansberg, Adriana. Graphs with equal domination and 2-domination numbers. A: International Workshop on Optimal Networks Topologies. "Proceedings of the 3rd International Workshop on Optimal Networks Topologies IWONT 2010". Barcelona: Iniciativa Digital Politècnica, 2011, p. 285-293.
URIhttp://hdl.handle.net/2099/10369
ISBN978-84-7653-565-3